The mighty North face of the Matterhorn

One of the 6 classic North faces of the Alps which, I have been really keen to climb for a long time and I have been waiting for the right partner, weather, conditions, time off etc to come together. Finally the time came last week when everything fell into place and Morgan Bdl and myself were ready to climb the route.

After dropping my daughter off at Creche I drove to Martigny to meet Morgan, we sorted gear and ropes then continued in one car to reach Tasch to leave the car before continuing on train to Zermatt – then the cable car to get to Furi – then a 2 hour walk to the Hornlihutte. The Matterhorn is such an impressive mountain! Looking up at the dark North face rising as we got closer increased our sense of aprehension about climbing it.

The walk in from Furi
Expecting to bivvy outside, we were pleased to find that the winter room at the Hornli hutte was open. We met 3 other climbers from Italy who were going to be attempting the climb with us the following morning. We cooked food, melted snow, sorted gear and settled down to get some rest before what we knew was going to be a long day.
We awoke at 2 am to brew up and eat before setting off at 2.45am to start the climb. It was a beautiful morning, cold, crisp and without wind or light from the moon to luminate out path. Fortunately there was a good track leading up the glacier which we could follow easily, making route finding simple. There were however tracks going all over the face higher up so it was hard to know which track to follow. We moved quickly until we reached the start of the mixed ground around 7.00am. The sun rose and lit the mountains around us making us realise we were slightly off route but we just needed a pitch of mixed climbing to rejoin the easier ice ramp.

Sunrise on the North face. 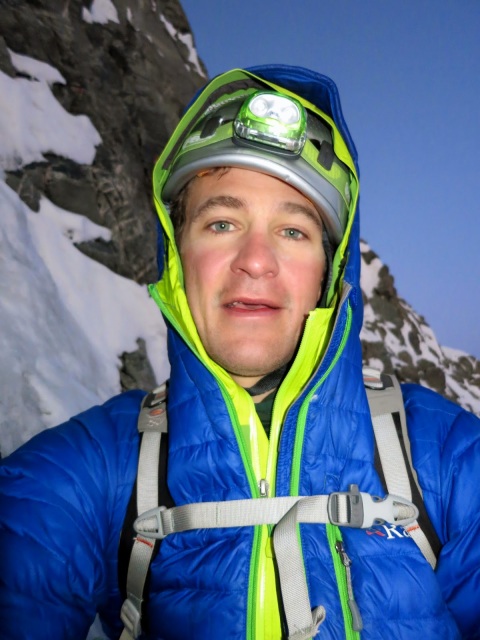 Me on some easy angled snow slope

Morgan starting the mixed section – slightly off route
Waiting at the belay while day broke, a nauseous feeling kicked in, maybe due to a cold I was coming down with or due to altitude as we were approaching (4000m). The wind had picked up and the temperature on the face seemed to plummet. With the sun rising and our pace rapidly slowing the size of the face seemed to grow in my mind as did the enourmity of the climb. Morgan lead a tricky mixed pitch and I seconded to get into the easier ice ramp. I lead the water ice pitch then Morgan lead the precarious traverse pitch which took us to the start of the easier angled snow ramp.
After the difficulties our pace picked up again and we were making good progress up the face, the task seemed achievable again. I was feeling much better, happy to be moving quicker and we continued simul climbing up easy angled slopes. We reached the top of the route around 2pm glad to be in the sun. The wind had picked up and our faces and fingers were freezing. There was still 300m of scrambling up the ridge line to the summit which seemed to take forever but in reality only took an hour. The summit is incredible, arguably one of the best. A long ridge line, incredibly exposed on both sides with a section cut away giving shelter from the wind. We were thankful to have some respite form the cold constant Bise wind and a chance to rest looking at an incredible landscape. We congratulated each other and were glad we still had daylight to descend down the Hornli ridge.

Sunrise on the Dent Blanche 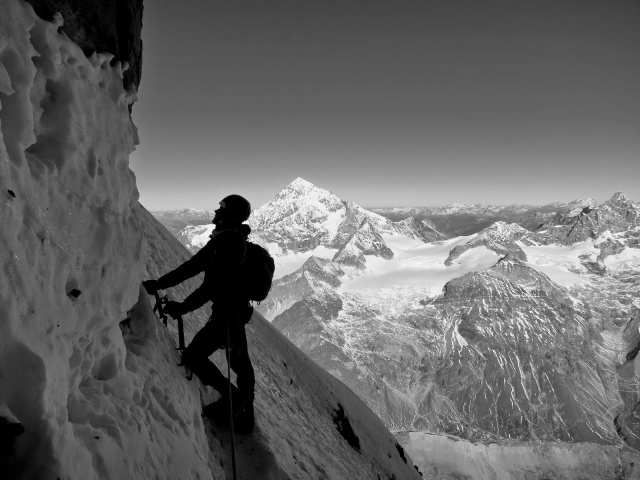 Morgan at a small Bivvy site

We had a small bite to eat and not a lot of water as our bottles had frozen up. I guess it was around -20’C with wind chill. As soon as we moved back into the wind we froze again so we were both quick to move along the ridge line and then down the fixed ropes to the Solvay hut. Our rope was literally blowing in an arc in the sky in winds which I guess were around 60km/h. It made descending very exciting especially when night fell. We weren’t far away from the hut so we continued into the night to reach the hut around 18.30. It would have been dangerous to carry on descending so we were glad to reach the shelter.

The Solvay hut is in an incredible position and I am sure has saved many lives. There are beds and rugs for an emergency bivvy and were glad to be out of the wind and able to brew up and warm ourselves. Our thoughts went to the Italian team who were still out on the face and as we found out later had to make a cold bivouac on the summit for the night. They were all okay though. 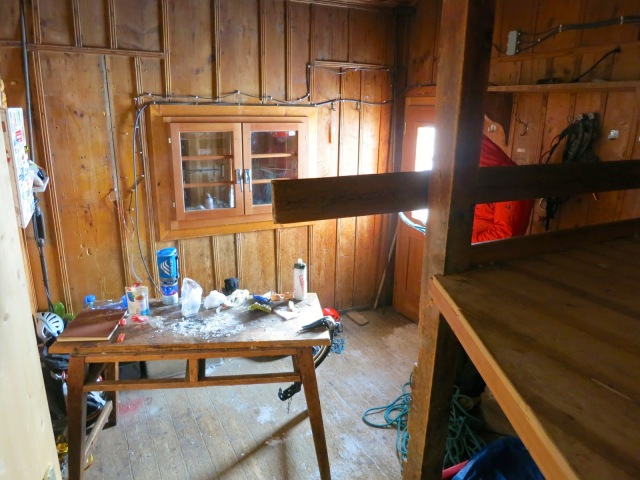 Descending down the Hornli ridge line.

We shivered through the night and woke in the morning to hear strong winds again and poor visibility. I realised I wouldnt make it back in time to teach my lesson so made a call to rearrange and then we prepared to descend. The rest of the descent stayed sheltered from the wind and was much easier than the upper part so we lost altitude quickly to arrive back at the Hornlihutte around 11.30am. Again we brewed up, packed up and prepared for the walk out.
We were in good spirits, we had climbed well, safely and fast enough to climb the route in good style. The route is superb up an incredible mountain which has a huge feel about it. Conditions were superb and it was a pleasure to climb the face with very few other people on it.
The walk out and drive went by and I was glad to get back to my wife and daughter a little tired but all in one piece. Of course I thank them for thier pateince, understanding and support in this ridiculous sport of Alpinism ! 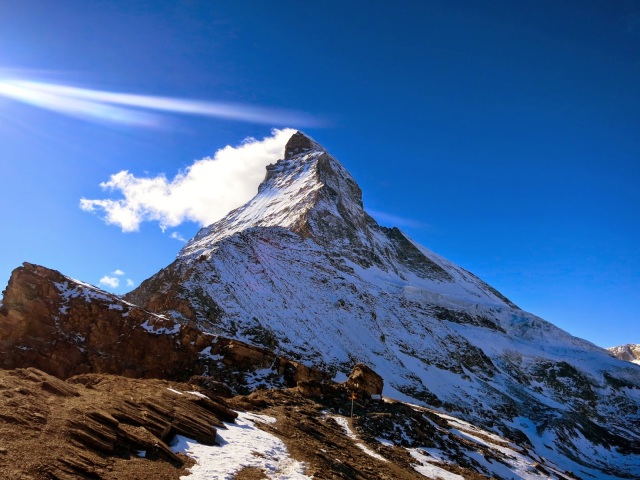