Looking up the North face of the Courtes.
A classic alpine north face with potential for a ski down from the top down the NE couloir or an easier ski down the south side. There has been a lot of snow in Chamonix recently and we weren’t sure if that was going to be a problem getting to the base of the route, but it had been a couple of days since the last snowfall and the route was looking in great condition. There were strong winds predicted up to 90kph high up but sunshine close to 90% so we decided to go and have a look and if we could, ski down the south side.

A first! An empty telecabin!
An empty telecabine took us up to Grand Montets where we were alone, making quite a change from the 2 weeks skiing around Chamonix previously. An hours ski and skin took us to the Argentiere hut where we a few people were getting stuck into wine, cheese etc. Thankfully they shared some of it with us, much appreciated!

An early start from the hut at 6 meant we got to the base of the route after a couple of hours after skinning through fairly deep snow, which had a crusty layer on top of fresh snow, which wasn’t well bonded underneath, it felt a little dicey in patches and confirmed our decision to ski the south side.  The sun came out as we were gearing up for the route and we got going moving together over the bergschrund gingerly. The first ramps were on unconsolidated snow, hard work breaking trail and slow going.

Good views across to Mont Dolent
The terrain steepened to around 70’ and on much more solid ice making moving faster and more enjoyable. Around 150m of steeper ice (around grade IV) lead through gullies with unbelievable amounts of spindrift pouring down. There were clearly strong winds up high and we both had doubts about whether we should push on. I thought the spindrift would improve as we got higher up the route so we decided to carry on. 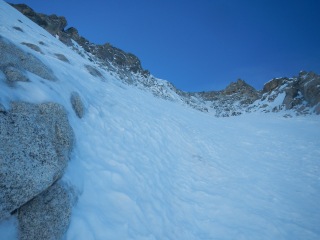 Looking up to the 2nd crux on the route.
At the top of the crux pitches around 500m up the route I set up an anchor to bring Bart up to me but there was clearly something wrong, he was climbing very slowly taking around an hour to 2nd a pitch. It was clear he was in a lot of pain when he came around the lip, after  a block of ice had struck him on his arm. He struggled over to me and we decided retreat was the only sensible decision.

Bart retreating.
We were probably the first team on the route this season so there was very little in the way of fixed equipment on route making the descent difficult, also with Bart unable to use his left arm added to the difficulties. We used a series of in situ pegs, threads, boulders, nuts, etc to make a long and tricky descent to the base of the route. Glad to be at the base before dark but disappointed to miss out on the summit and ski down the other side.
It’s an impressive line running up the Courtes, the ice is in good condition at the moment and when the snow consolidates around the base a little more it will be in perfect condition for some fast ascents. 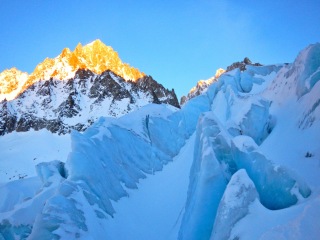