A picture book mountain, conical, covered in snow and stands higher than anything around it at 5,610m. It’s the highest Peak in the Middle East and the highest volcano in the whole of Asia. The mountain is renowned for having strong winds and exceptionally cold temperatures as low as -50C. It has had only 1 other British ski descent by the Eagle Ski Club in 2004. We aim to be the second.

An early start, 5.30am, up, packed and off to palour the start of the south west route up Mt Damavand. About an hour drive in a car, but about 3 in our minivan.

On route, Hussain, our Iranian companion described what a typical Iranian breakfast was, consisting of sheeps head and trotters, mashed in a broth. Sounds foul, but popular in Iran. He could tell we weren’t too keen to try so he took us to another place that served a different kind of broth which tasted similar to a mix of porridge and semolina. No-one seemed to know what went into the mix but we heard chicken and flour cinnamon and sugar were in there. We gingerly dipped bread in it and made our best attempts to get it down but only managed half at best, apart from Lockyer.

Bright blue sunshine and quite a strong wind, temperature about 10 c and we set of at an altitude of around 2,400m. An incredible setting, views to the yellow flower a mountain ridge that stretches over 10 miles.

We made it to the 1st ‘hut’ after a few hours skinning to around 3100m. The hut is more like a mosque with a huge golden dome on top of the roof and shrine facing west to Mecca.  After looking at the facilities John, Scott and I question our decision about leaving out a roll mat behind, as there is just a concrete floor with a layer of ice on, it’s going to be a cold night! Henry and Chris mock our high fast and light tactics but I have a feeling they will be regretting having such heavy packs at altitude. 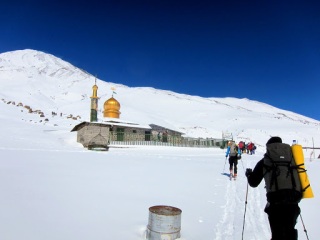 We skinned up about 200 m in the afternoon, to help with acclimatisation and to check out the skiing conditions. The snow is really hard and crusty, with a large wind slab on the surface making skiing challenging.

Cooked up loads of food in the ‘hut’ and took some incredible photos of a moonlit mountain. A great day. 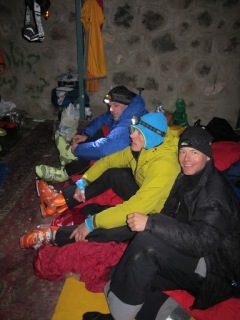 A fairly early start at 6am, but to be honest I was pleased to get out of my cold uncomfortable bed. ‘I’ve had worse nights but this is up there with them’ Scott said when he woke up. Chris was right, sleeping on the gear loop of your rucksack isn’t comfortable, but I know we’ll appreciate having less weight when we start going up.

A 1200m skin up To the next hut, should take about 4 hours, hussain says. about 200m into the skin we heard Henry having issues, ‘my f****ing skis come off’. Looking at the size of his pack I’m not surprised it came off, must weigh 25kg. His camera equipment alone weighs 7k’s! Wanting to do some training I offer to take his pack for a while and it makes a difference. Glad I packed light! 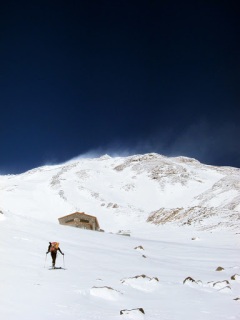 After arriving at the hut we brewed up and went for an afternoon skin again. We’re now at 4200m, I’m feeling well acclimatised after being on the Les Droites the week before. Had an awesome ski back down to the hut and found the hut was cooking us dinner. Winner!

It’s going to be a much more comfortable night, in bunks and a small room. Getting up tomorrow at 5am to start toward the summit.

Alarm goes off at 5, it’s summit day and we are planning to climb the remaining 1400m, then ski the whole mountain, a massive 3,500m to the road to meet the taxi. It’s fairly cold about -5C but with a strong wind making it feel about -20.

We make a strong start, slow and steady progress, none of us feeling the effects of altitude much. It is possible to skin up nearly the whole mountain but for our teams progress we were faster putting skis on our backs and boot packing. Around 5000m the altitude started kicking in and upward movement was slow and hard! We all summited about 2.30pm with incredible views to the caspian sea in the north, and other mountain ranges surrounding the peak.

It was now time for the best bit, the ski down, 14 km of fresh tracks down a huge mountain. The snow at the top was awesome, the views incredible and the terrain was great for skiing. Skiing at altitude is hard work though and putting in too many turns leaves you heaving for breath and a banging head ache. We skied well and quickly and made it down in time to meet our taxi driver.

A well deserved meal was demolished on route back to the hotel, all of us needing to replace the calories and eat something other than go bars, or gel. The hotel is close to some thermal springs and has hot water piped in to two big baths down stairs. So nice to have a bath even if it did leave us all stinking of sulphur, better than stinking of 4 days of hill sweat we thought.

It has been a cracking adventure on Mt Damavand. An awesome setting, a top class ski down and a great experience.